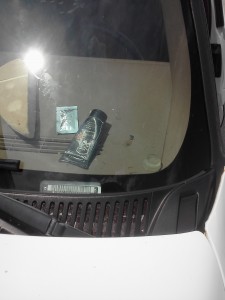 Being the devils advocate sometimes takes a little time. but that’s what I felt like when I decided to challenge the manufacturers claim that the resin he was offering us was something like finding the surfers Holy Grail since he claimed it had endless shelf life and was safe to use on those delicate epoxy foam cores as well as the good old polyurethane foams.

Straight away I tested it on an open epoxy board ding and sure enough it past the first test, but still I was determined to find a limit since my search for a good resin to add to the Phix Doctor line was a serious commitment. So on the dash it went, I’m talking about my Chevy pickup dash that’s usually parked in direct subtropical sun with a cab temperature of about 130 in the afternoons!

Well here we are 3 summers later, yep over a 1000 oven hot days later and that heat warped tube is still defiantly offering up resin as fresh as the day I put it there…so where does it end? Well pretty much here will do since what we’ve considered normal shelf life has just been thrown overboard with a resin that’s crystal clear and styrene free, I’d say the standard has been raised.